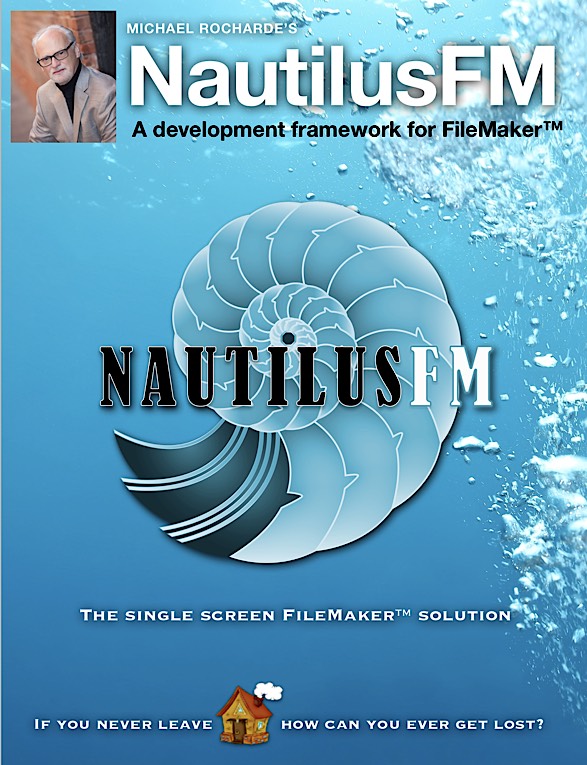 This ebook is a step-by-step guide to building your very own NautilusFM solution from scratch. Having said that, however, the FREE NautilusFM Example file that you can get, by filling in the simple request form (and accepting the BSD Open Source License), has much of the work done for you and can be used as a base for completing your own projects or for converting an existing one.

Included is a chapter  with quite a number of advanced tips and tricks (techniques) that are used in NautilusFM. Perhaps advanced is not the correct description as some of them are fairly simple but they’ve taken years and years of working with FileMaker to discover and now any developer, even rank beginners, can take advantage of them without having to go through the long learning curve.

Every technique started with somebody trying to solve a problem and when they did, as is the way of the FileMaker community, they wanted to, and did, share it with everybody they knew and many they didn’t. Some of those people further developed those techniques into something more powerful or more flexible or just adapted it for a different problem and thus the cycle goes on.

Imagine you are organizing a singles tennis knockout tournament with 500 players. When a player loses a match, he is knocked out until only one person remains. How many matches have to be played for the winner to be declared?

The lateral thinker says there are 500 players and 1 winner so there are 499 matches.

Where this makes a difference is in the time it took to arrive at the right answer and this is important because time is the most valuable commodity any of us have; the better you use that time, the more you can achieve.

Ultimately though, it’s not about the time it took; it’s about solving the problem which is, for me, the best reward. NautilusFM is full of such rewards.